Tekels Park is a 50 acre woodland estate near

It is owned by the Theosophical Society (Adyar)

in England and has been a Spiritual Centre

and sanctuary for wildlife since 1929

but is now being sold to a developer.

The sale to a developer is surrounded

by secrecy but news has leaked

out and many are unhappy. There is

further concern that the Theosophical

Society leadership are letting this valuable

A betrayal of the Theosophical Society in ’s members.

A betrayal of the wildlife that was once valued

and is now being dumped. Theosophy talks of

compassion for animals and this indifference to

the fate of the wildlife has dismayed many.

A betrayal of St Francis Church which has been

You don’t need a Diploma in Brain Surgery and even someone with a Diploma in Astral Travel will know that this is a bad time economically to sell . Despite this glaring fact, professional advice not to sell was ignored. No other options were put to, or invited from, the Theosophical Society in ’s members and negotiations were started without their knowledge. When news leaked out about the sale, the leadership withheld the information that the sale was to a developer.

Having chosen to start from this position of weakness, the negotiators selling the park have skillfully manoeuvred themselves into a situation where they might virtually be giving the Theosophical Society in England’s heritage away.

The negotiations started in November 2009 and haven’t been completed yet. Have you wondered why this has gone on so long? The buyer is in no hurry because he knows that the longer he strings this out, the greater the chance of the seller getting desperate and accepting a lower price.

Rather than pull out and explore alternative strategies, the negotiators continue to plug the idea that the decision to sell is based on dire figures, even though nobody outside the elite inner circle has ever seen these figures. The leadership hasn’t actually presented the membership with a proper case for the sale that includes detailed financial information. Why not? 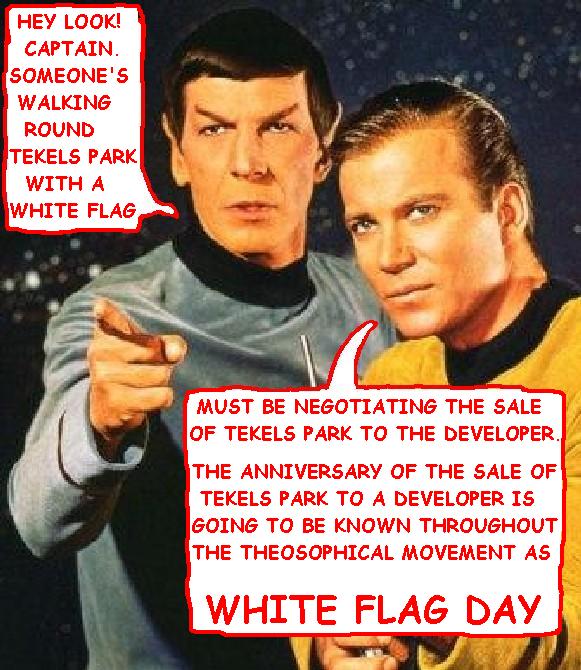 Now in a position of weakness of their own making,

the leadership seems ready to surrender

Tekels Park at any price.

is being sold to a development company that is paying serious money and has to turn a profit. Where does the idea of the Theosophical Society using the Park after the sale come into this, and what will be the fate of the wildlife that the Society has valued for decades?

The leadership probably came up with the idea of negotiating a deal to use the Park after it is sold, so as to make the whole thing more palatable to the membership. A lot of vague ideas were kicked about by both sides but the leadership didn’t bother to get a legally viable agreement drawn up at the start, as a basis for negotiation, or even see if any agreement of this type was enforceable. The buyer has been happy to watch all this as the clock ticks on. 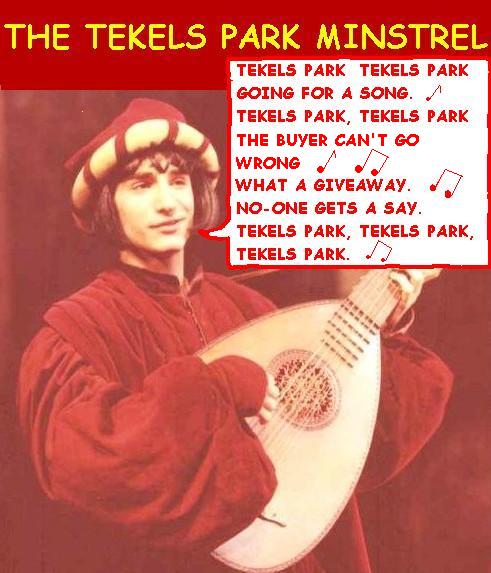 Negotiations to sell started before the

in the picture now. 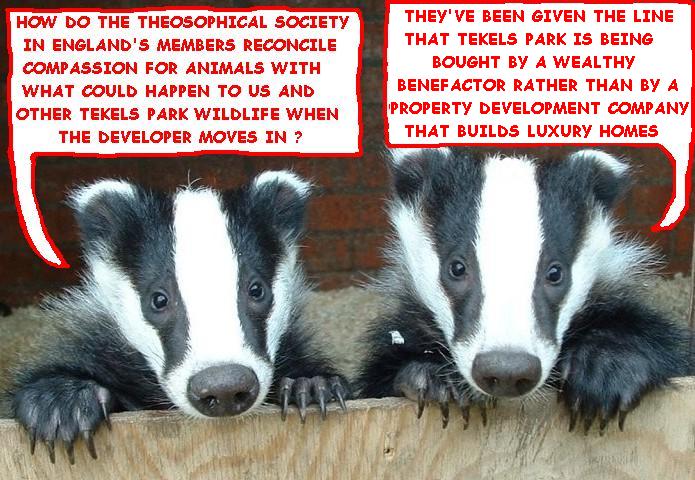 Some members have looked into the situation

and there is serious discontent.

The leadership refuses to discuss the fate of the wildlife after is sold and there is no forum for discussion. The official in house magazine “Insight” was conveniently shut down without prior warning in January 2010.

There is a long tradition of support for animal causes within the Theosophical Movement.

The Theosophical tradition of compassion for animals is clearly indicated by this quotation from an article by former Theosophical Society in President, Colin Price, entitled;

Compassion: The Basis of Peace & Understanding

We are sparks of the same Divine flame. In fact we share this with all life and so theosophists extend the same principles of compassion to the animal kingdom. 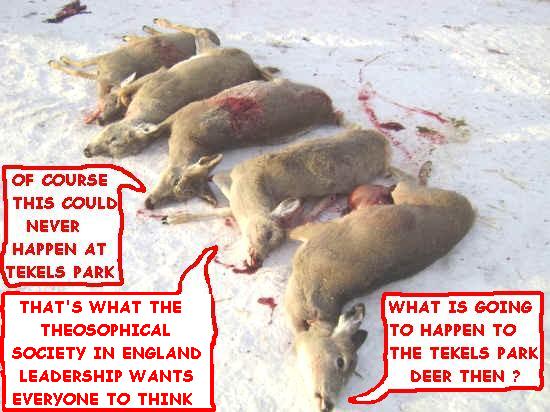 It is difficult to see how the future of the

Tekels park deer can be compatible with

development of an area which is only 50

acres to start with.

As a Theosophist, I believe that a concern for animal welfare would form an integral part of a Theosophist’s personal philosophy.

But all ideas are for consideration

Are you a Theosophist?

Do you have any views on this? 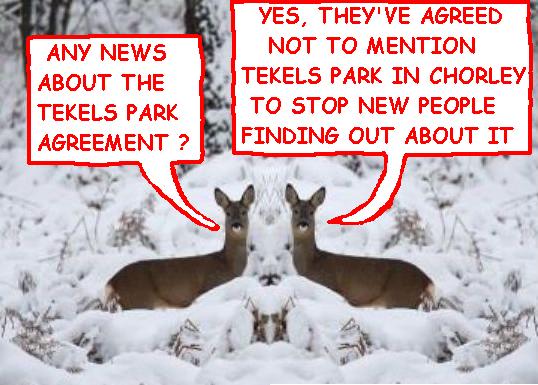 Forced out of , the Theoversity has moved to hired venues in , and . There is concern that new members may be upset and deterred by the situation and the uncertainty surrounding the future of the wildlife.

It is unclear why the Theoversity has had to move out of when an agreement to use the Park after the sale is being touted. 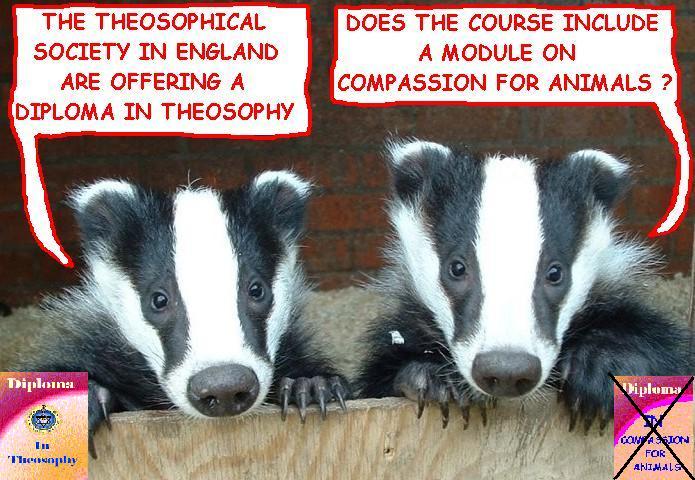 The new Diploma in Theosophy course being

offered by the Theosophical Society in

does not appear to cover the subject of

compassion for animals. This course includes

an exam – Who’s set themselves up as the Grand

Hierophant who will mark the papers? 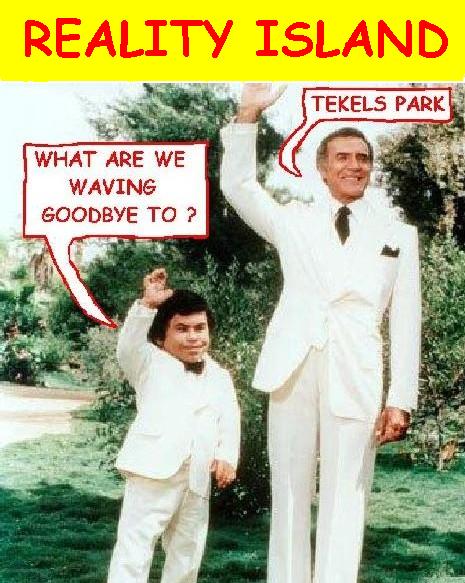 Unless the membership bring about a turnaround,

this is the most likely outcome.

The Theosophical Society in (Adyar)

The Theosophical Society administers the Estate through a limited company 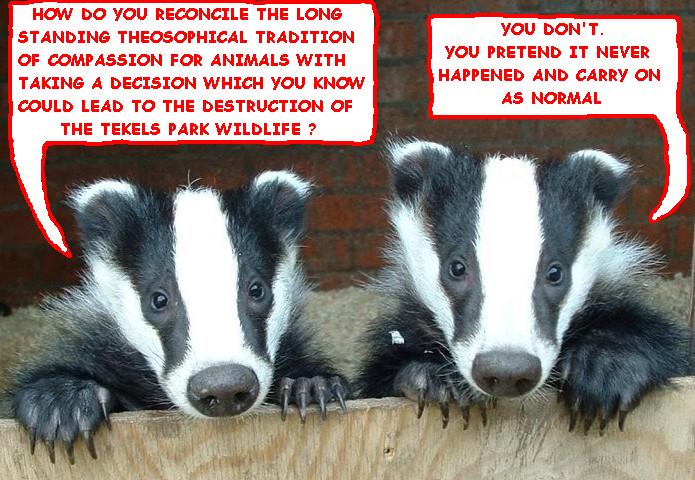 I am dedicated to the future of the Tekels Park animals and have created this website in support of saving them.

My main concern in posting information on this, and related websites, is to draw attention to the sale of the 50 acre sanctuary for wildlife to a property developer and the inevitable deaths of the animals by slaughter or habitat destruction.

The killing of the Tekels Park animals would be an obscenity and as a long standing student of Theosophy, I cannot turn a blind eye.

The Toff’s Guide to Selling

Tekels Park to a Developer

Party On! Tekels Park NOT!

but he certainly has one in satirical singing

Yet Theosophy Talks of Compassion for Animals

Once Highly Valued by the

Article describing Tekels Park and its much

cherished wildlife by Theosophist and long

The Theosophical Value of

Tekels Park is Being Sold to a Developer